Cactus poachers: we are watching you

An excellent article on a longstanding topic appeared in The Atlantic on February 22, 2016:

Busting Cactus Smugglers in the American West: How undercover agents infiltrated the global black market for cacti (by J. Weston Phippen).
The first letter in the genus name, i.e. in the scientific name otherwise properly referred to in italics although with some misspellings, should have all been capitalized in the article.  Overall however it is a well-written piece, although with a less than satisfactory ending in terms of what happened to the smugglers that were caught red-handed.

This activity has been going on of course for decades.  A limited number of obsessed folks in Japan/Asia are another big source of the problem, but Europe typically has produced some of the worst offenders (Germany, Austria, Russia, etc.).  They come over and take whatever they want and don't care whether they are in a national park or not.  Note from the article that they even lifted a plant right out of Utah's Arches National Park, probably a Sclerocactus parviflorus.

It isn't just foreigners that do this; there are avid domestic cactophiles acting alone or sometimes in groups that make periodic raids on Utah cacti from time to time as well.

Usually the foreigners are smarter than this, and will simply put seeds (it is not okay to take them from without permit much less from rare/sensitive plant species or federally listed species; different rules may apply depending on the species) and parts of dug up plants into envelopes or small boxes and simply mail them out to themselves.  Private couriers like FedEx/DHL/Airborne used to be pretty popular historically and was the more common method which then typically avoided customs completely.  Stuffing plant parts into cereal boxes with respect to some of the activity noted in the recent article and caught on a video camera:  not so smart.

These people are terrorists, just of a different sort. To be only levied a small fine after being caught red-handed however is hardly going to discourage this activity; if anything it will encourage this behavior.  People like this should frankly at a minimum have their passports revoked indefinitely, or for at least some very long period of time and made to pay multi-thousand dollar fines.

We should all be outraged at this flagrant and ignorant behavior.  It must stop.

To cactus smugglers:  you are being watched.  There are video and surveillance cameras in places that you might not expect.   We will work to ensure you are caught and that fines are increased.

To anyone who thinks they can collect just seeds and that it is just fine:  wrong.   Stop.  Check the laws of the state and country you visit.  You cannot move plant parts on Utah highways without a permit.  You cannot take seeds much less parts of plants from our national and state parks and from other protected areas.   You cannot take seeds or plant parts from federal lands without a permit from an appropriate federal agency.

What can you do?

Become aware of laws relating to the collection of plant materials.  For starters, see:

If you see suspicious activity in national parks/monuments or in state parks, report it immediately to local officials.  If a federally listed species, report that activity to the US Fish & Wildlife Service (if in Utah, to the Salt Lake City office).  Take pictures if possible including areas that seem to show obvious signs of digging, tire tracks, etc. and provide those to the appropriate land managing agency.  If you can't determine easily who that is, e-mail the information to the Utah Native Plant Society:

Posted by Tony Frates at 7:55 AM No comments:

Few understand that the the U.S. Endangered Species Act of 1973 (ESA) is global in its intended scope; it is about the entire planet, and a new way of thinking about it.

And that's one of the things that makes it one of the most intelligent and forward-thinking laws that this country has ever passed.  The listing of the African Lion in December of 2015 illustrates how it often is a law that recognizes what is important, even if our direct enforcement options are relatively limited.

Will we continue to lead the way in this regard? And will we protect our own "African lions" as well?

Listing a species under the ESA brings it the attention and potential action that may help lead to significant voluntary and other conservation actions.   Unfortunately when it comes to listing plant species in the United States, the question as to whether or not a species occurs on federal lands is given considerable weight by the USFWS and becomes a factor in their decision as to whether to list.   As the listing of the African Lion demonstrates, this thinking is wrong.

It matters not where a species occurs in determining whether it is ultimately deserving of protection.  It matters, yes, in terms of assessing threats.  But it is not relevant with respect to whether direct enforcement or other regulatory restrictions would apply.  Rather, the indirect benefits to listing are huge.   The FWS also appropriately recognized this with respect to the endangered lions of Africa and India.

But this is also true with species such as Utah's Penstemon flowersii which in part was denied the listing it deserved because of inadequate regulatory mechanisms, because it mostly does not occur on federal lands.  That is precisely one of the reasons why it should have been listed.

Through the initial efforts of the Utah Native Plant Society (and others) in identifying it as one of our most "extremely high" species of conservation concern in the state of Utah,  and subsequent very significant the efforts of The Nature Conservancy, there is hope for the also magnificent P. flowersii,  and which again illustrates the many benefits of recognizing a species that needs our attention.

Posted by Tony Frates at 9:21 AM No comments: 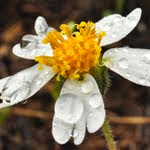